Jellyroll is considered to be the best Philadelphia wedding band and party band by critics and audiences alike. For an amazing party you need to look no further than Philly’s original horn party dance band, Jellyroll. See what the Philadelphia Inquirer had to say about Philly’s favorite wedding band! Read the full article here.

If you are looking for experience, stability and impeccable reputation, call on the Jellyroll band. They have been entertaining the most sophisticated parties with its unique blend of dance music. Fronted by their exciting singers, and driven by the Jellyroll Horns and the area’s tightest rhythm section, Jellyroll has won over audiences from Madison Square Garden in New York City to the White House in Washington, D.C.

What Makes Jellyroll the Best Wedding Band in Philadelphia?

Their impeccable performance is what makes the Jellyroll band the best wedding band in Philadelphia. Their style encompasses a mix of high energy and elegance. Pair that with a repertoire that includes everything from the old school classics to the newest top 40 hits.  Jellyroll performs at over 120 exclusive weddings, mitzvahs, social and corporate events every year. They have performed at thousands of events since their inception. They have performed around the USA and have become especially sought after. The band rehearses often to stay sharp and current.

What Are Some of the Awards Jellyroll Has Won?

Jellyroll has earned the “Best Of Philly,” “Best Of Delaware,” and “Best Of The Main Line” awards for several years in a row. They have been selected as one of the “Hottest Bands” in the United States by Modern Bride Magazine. The Philadelphia Inquirer has also recognized the Jellyroll band as one of the “best Philadelphia party bands”. They have been featured in many national publications including Martha Stewart Weddings, where Jellyroll’s bandleader, Kurt Titchenell, was acknowledged as an expert.

Notable Performances for the Best Wedding Band in Philadelphia Jellyroll’s accomplishments are a true indicator of their success. Our notable performances include a performance for the opening event of the 2016 Democratic National Convention at Penn’s Landing. This performance was for a crowd of over 10,000 and we have done it multiple times. The Philadelphia Auto Show’s “Black Tie Gala” benefiting Children’s Hospital of Philadelphia, the Philadelphia Flyer’s Wives’ Fight for Lives Carnival at the Wells Fargo Center, the National Museum for American Jewish History’s annual gala, as well as scores of many memorable and beautiful weddings, mitzvahs & corporate events are some of our other notable performances. Perhaps one of the most talked about weddings in Philadelphia featured Jellyroll, with a special surprise by Tim McGraw, singing “My Little Girl” for the Father-Daughter dance at Philadelphia’s Cescaphe Event Group’s venue, Vie. 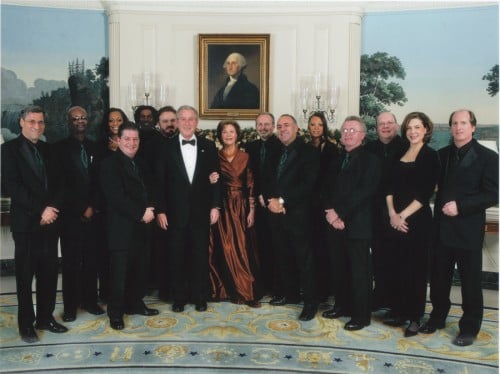 Jellyroll’s defining moment may have been what many consider to be the ultimate honor that can be bestowed upon any entertainer: An invitation to perform at The White House. Jellyroll, often called the best wedding band in Philadelphia, has received that honor, invited by President Bush and First Lady, Laura Bush, to perform at the 2007 Congressional Ball. The Congressional Ball is attended by Congress as well as other dignitaries and their guests. After a private photo session and presentation with the President and First Lady in the East Diplomatic Reception Room, the band performed a 2 1/2 hour show only to be asked by President Bush to continue for another 20 minutes. Jellyroll’s dancing audience filled the White House East Room and actually spilled out into the surrounding areas.

In 2008, Jellyroll performed again at the White House at the request of First Lady Laura Bush for her 44th high school reunion. Jellyroll is currently booked at many high profile events for 2022 and beyond and looks forward to keeping many dance floors full! Jellyroll is truly honored when people say they are the best wedding band in Philadelphia. We value everything that we have accomplished. We continue to work diligently to remain competitive and strive to achieve perfection at every detail. Humility is considered crucial to our success. We consider every performance to be our most important and we truly value every opportunity that lies ahead. If you are planning a beautiful Philadelphia wedding and want the best wedding band in Philadelphia, call Jellyroll.  If you are considering a high energy mitzvah band, or you need sophisticated corporate or social entertainment, Jellyroll is the versatile dance band that gives you the energy and variety you need to keep your guests dancing all night long.

Thank you for the wonderful performance at The White House on March 29, 2008. All who attended the reunion had an incredible time, and your music was a highlight of the evening.